Karakol is a city with about 75,000 inhabitants at the eastern end of the lake Issyk-Kul. As well as is located about 150 km from the Chinese border. Karakol was once a part of Silk Road but unfortunately played only a subordinate role there. Karakol is the starting point for trekking trips and for mountaineers who are aiming at the mountains of Tian Shan. The highest peaks of the Tian Shan Mountains are the Pik Pobeda with 7,439 m and the Khan Tengri with 7,010 m. From Karakol to the Base Camps of the two peaks you need only 8 hours.

The city has a wooden mosque. The mosque was built between 1907 and 1910 by Chinese skilled workers and locals. The Dungans built the mosque in the style of the Tsin Dynasty and completely without metal nails. A wooden orthodox church was built around 1895, which was used as a club and warehouse during the Soviet period. It was restored and handed over to the original destination of the Orthodox Churches.

In Karakol there is the Przhevalskiy Museum and Monument, the Dungane Mosque from 1910, the Russian Orthodox Church and the Kupecheskii Proced Street, which imitates the 19th century style. Karakol has the typical appearance of a Russian colonial city. 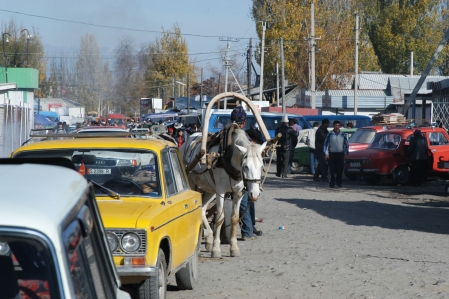