The Son-Kul Lake is the second largest lake after the Issyk-Kul in Kyrgyzstan and is located on a mountain plateau in the interior of Tian-Shan on 3,016 m above sea level. The area is flat, not wooded and resembles a savannah. At night you have the feeling that the giant stars you can take by the hands. Here one can experience all seasons within one day. The Edelweiss is encountered here at every step. The route goes through the mountain Savannah to the mountains that surround the Lake. They are 4,500 m high, but as the lake is already at 3,016 m, seem relatively flat. The shores of the Lake are popular since time immemorial by the nomads as summer showed although the growing season at the height is rather short. Here, the folklore and traditions of the Kyrgyz nomads in their original form are preserved.

The shepherds live in traditional yurts (Round felt tents over a wooden frame, the typical dwellings of the nomads who are everywhere in Central Asia) during the summer and descend to their homes in the villages for the winter. Many of the shepherds are happy to welcome tourists and offer them a bowl of Kumiz, fermented mares milk.

It is even possible for visitors to stay overnight. Slept normally is on mats on the floor. During the summer months, however, some "yurt inns" are also provided, where the tourist kitchens, toilets and cleaning service are offered. It is also possible to book trekking tours, horseback riding or carrying loads.

There are four ways to leave the plateau. One about Sary Bulak in the northeast; A second over thirty impressive serpentines towards Narin in the southeast (If you have time, you can make a detour to a beautiful waterfall in a forest). The third variant leads across the Ak valley to the south-west, and the fourth leads along the coal mines of Kara Ketsche in the direction of Tschaek in the north-west. The roads are not asphalted and can be impassable in places.

A riding trip on horses would be another possibility. From some of the surrounding valleys, to the salt mines near Chong Tuz (about a 3-day tour). Before travel on your own is however discouraged. Such a trip must be arranged in advance.

In winter and often in the spring and the autumn months, these roads are blocked by snow (although it is sometimes admirable for off-road vehicles to do everything). There are no buses to the lake. If you are not a participant in an organized tour, you can take a local taxi from Narin or from Kotschkor to the top.

At the Son-Kul the visitor experiences pure nature. Although there are no trees on the plateau, there is a herbal paradise: Chamomile, Sage, lichens, Monkshood and ginseng - many of them are valued also as medicinal herbs. In the spring, also abundant flowers can be admired especially gentian and Edelweiss. n addition, there are about 66 different species of water birds that build their nests on the shores of the lake or around two-thirds of all in Kyrgyzstan. With a little of luck one gets here different kinds of seagulls and ducks; Cranes, storks, bald-eared guinea fowl, rain-whistles, hawks, rock-eagles, swarms and very rare Indian mountain geese. If you have the luck on your side, you can also observe animals such as deer, foxes, marmots, lynxes and wolves. Until 1959 there were no fish in the lake. Only then were they artificially settled in the lake and can now be sold (even in the cold of winter) on the markets of Narin and Kotchkor. The fishery has been strictly controlled and to protect the fish populations, the fish inspection has prohibited fishing in recent years. 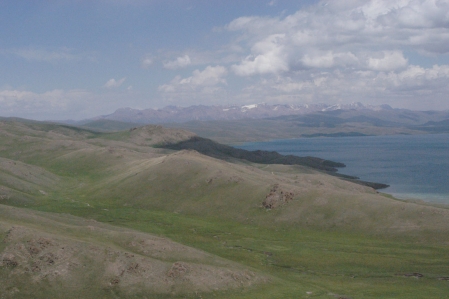 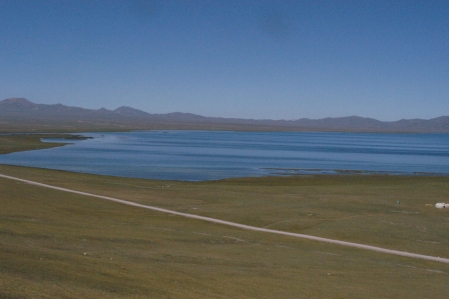 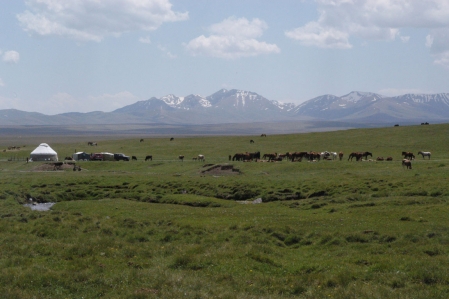 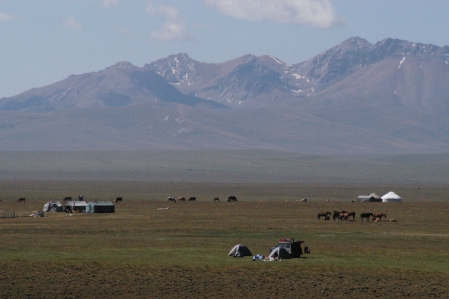 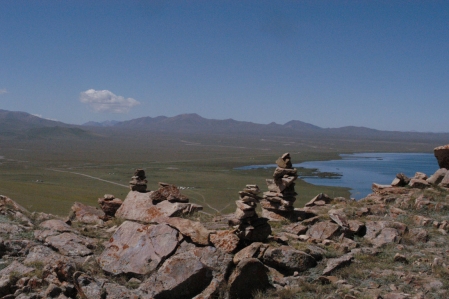